My friend Renee from Sylvania Pickleball Club called to ask a question relating to a situation that came up the other day.  Renee is retired and an avid golfer who started to play pickleball last summer.  She loves the game and has joined the many who consider themselves “addicted!”

Renee’s question was, “If the ball hits a players arm, then the paddle all in one motion and then goes over the net, is it a legal hit?”  There are two rules that I’d like to share to answer this question.

First, regarding the ball hitting the players arm….

According to the 0fficial IFP Rulebook, 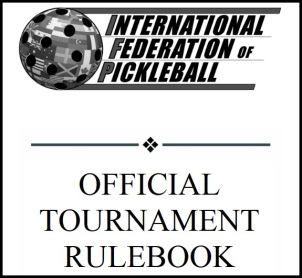 “The ball in play strikes a player or anything the player is wearing or carrying. There is one exception to this rule: if the ball strikes the player’s paddle hand below the wrist, the ball is still in play.”   (Rule continues, but unrelated to this question)
Therefore, as soon as the ball hit the player’s arm, it was a fault and the ball was dead. Had the ball hit the player’s hand below the wrist, it would have been considered part of the paddle and remained in play.
Second, lets change the scenario…
…….and say that the ball DID hit the player’s hand, then the paddle, and then went over the net.  This action was all one motion with the second strike being a result of a continuation of the players swing, and no second attempt was made to hit the ball after it hit his hand.
This situation is clearly defined in in the following rule.
Section 12 – Other Rules – Rule 12.A.
“Carry and Double Hits – Balls can unintentionally be hit twice or “carried”, but this must be during a continuous, single direction stroke. If the stroke is not continuous, not single-direction, or if it is a definite second push, the hit is illegal. (revised April 1, 2011)”
So Renee, there’s your answer!

Help your fellow players by sharing my blog ……..